Jack is a striking liver chestnut. with 3 expressive paces and trainability to match!

Jack, by GT Jake out of Vita (Voltaire II/Gibraltar II) is expected to reach 17-17.1 hh. This gentle giant has three great paces, with a powerful trot and canter.

Jack will make an amazing competition horse at any discipline with GT Jake and Voltaire II dual purpose stallions. He is a fast learner, super brave with a brilliant temperament. Has been rugged, hard fed since birth, vaccinated and feet trimmed regularly.

Jack’s sire GT Jake presents in a perfect frame. He has tremendous scope, spectacular elevation of the forehand and is a movement magician. Jake showed huge potential under saddle, but sadly due to a breeding injury his career was cut short. GT Jake is the son of the number one dressage stallion in the world and the first Jazz son ever to stand in New Zealand.

Jack’s dams sire Voltaire II has had an enormous influence on the shape of the current New Zealand sporthorse, whom is now retired from breeding.

With the super package of bloodlines, trainability, movement, scope, and presence, Jack is definitley a future star of the Equestrian world.

Note that this stud is registered for GST, therefore GST (15% NZ) will be payable at fall of hammer 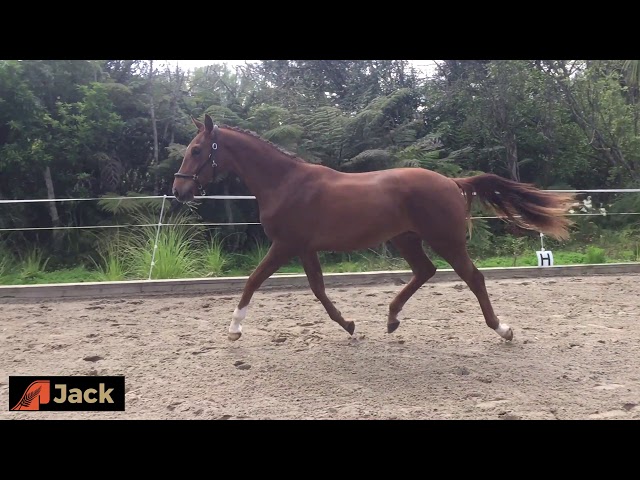