Rangatira Furst Anna is a chestnut filly with the world at her feet!

Fürst Anna has top performing dressage and eventing relatives through her bloodline. She is very eye catching with beautiful movement, a multi faceted youngster with exceptional dressage and jumping talent. She is completely unspoilt and has been allowed to grow up on a 300 acre farm so is well grounded and brimming with talent in all directions.

Fürst Anna come from the multi talented dam line Kiteroa Gwynavere, (half sister to  Kiteroa Kingston, dressage at Grand Prix level) and is half sister to  Vollrath Leila currently on the advanced dressage squad and horse of the year 2017 as well as, Kiteroa Lara, who is currently competing at 2* eventing level. Her dam’s sire, Anamour has not only been an exceptionally dominant dressage stallion in NZ but also produced eventers like Henton Attorney General winning at CCIO4*.

Her sire line is  Timbermill Fifth Avenue a 17hh chestnut pink papered Hanoverian stallion born in 2012. He is half brother to Avant Garde (dressage Prix St Georges level). Timbermill Fifth Avenue’s German sire is Fürst Nymphenburg who was reserve champion at the 2007 Hanoverian Stallion Licensing and is currently competing in dressage at Prix St Georges level in Germany. Timbermill Fifth Avenue has some of the big dressage names in his generation pedigree, Florencio 1 was the World Champion of 2004 and 2005 for young dressage horses and Grandam sire De Niro was the Hanoverian stallion of the Year 2008. De Niro’s  foals have dominated the German foal championships and foal auctions for years. Timbermill Fifth Avenue also has sensational jumping bloodlines, with his grand dam Paratata xx siring GV Braveheart,  who achieved an individual 8th place in Eventing at the World Equestrian Games 1998 in Rome and his dams sire Dynamit was a B-Grade Showjumper in his own right, before being retired to stud at age six.

Rangatira Fürst Anna is a youngster not to be missed, whether your sport is dressage, jumping or eventing!

Note that this stud is registered for GST, therefore GST (15% NZ) will be payable at fall of hammer.

This Stud is registered for GST. Vet report available on request. 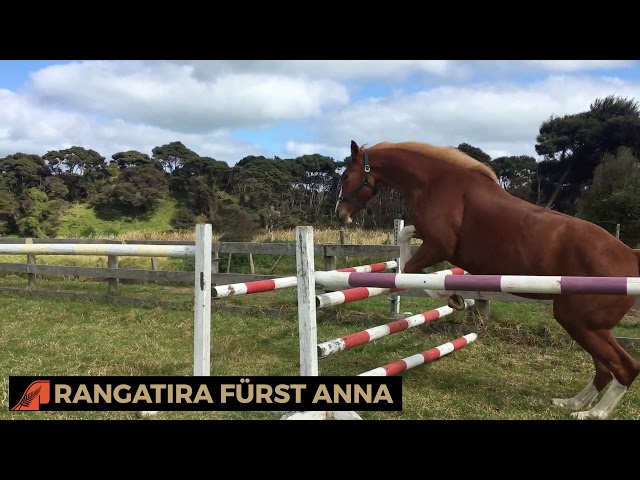